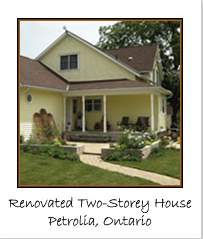 The property that Charles Fairbank owns and lives on is also the location of the first commercial oil well ever drilled in North America. The well was drilled in 1858. In 2003, this famous plot of land also became the source of geothermal energy for Mr. Fairbank’s house.

The original house is 1,880 sq. ft. and a 2,400 sq. ft. addition was constructed in 2003. The house was previously heated with propane. The propane was very expensive. When the addition was constructed, Mr. Fairbank decided the time was right to go geothermal. “We all have to be concerned about energy efficiency,” he says, and he wanted a system that would not be reliant upon fossil fuels. He was also willing to invest more capital for a long-lasting system such as geothermal.

A local NextEnergy Geothermal Specialist performed the installation. A Genesis™ Forced Air geothermal unit was installed with a desuperheater (hot water heater) hooked up to the hot water tank. A ground loop measuring 2,500 ft. in length was buried in a single trench in the front yard.

The geothermal unit provides forced air heating and air conditioning to the entire house. Additionally, an infloor heating system was connected to the hot water tank in order for the unit to provide infloor heating to a small area of the house.

In addition to the geothermal system, the Geothermal Specialist also installed new ductwork and insulation throughout the entire house. The contractor also put in an air filtration system to remove fine dust and particulates from the air for the health of the Fairbank family.

The installation of the geothermal system coupled with the upgrade in insulation and ductwork have resulted in great gains in efficiency, just as Mr. Fairbank had hoped. His house has more than doubled in size (with the addition) while his heating bills have been reduced by at least 70%, from about $4,000 a year to $1,500 a year. The system also provides air conditioning.

Over the past three years, Mr. Fairbank has had ample time to fully enjoy the benefits geothermal energy has to offer. In his own words, “I am a happy customer. I recommend geothermal energy to people all the time. It’s an ideal system.”